Trello: Your digital replacement for sticky notes and whiteboards? 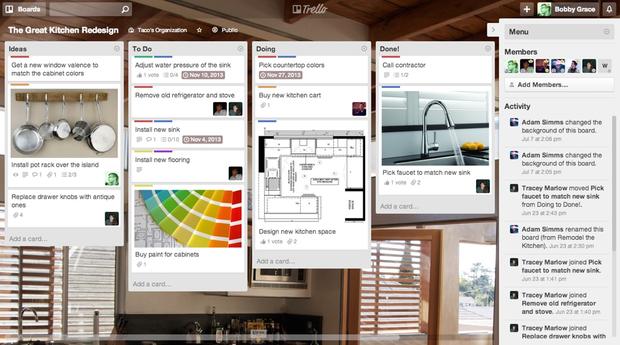 Collaboration and management app Trello recently hit a milestone of 10 million users and released some new integrations for its business tier. Here’s how it can help you get work done.

When Michael Pryor and Joel Spolsky began building developer tools through their company, Fog Creek Software, they began to notice a pattern when they went to visit software teams.

“We would see these giant whiteboards that they had in their offices with Post-It notes all over them that they were actually using to keep track of their projects,” Pryor said.

While these teams would obviously be using some sort of bug tracker or another software tool, they were using these big boards to keep everyone in the loop on specific projects. This is when Pryor and Spolsky got the idea — they would build a better whiteboard.

Trello, a collaboration and task management tool, made its debut in 2011 and was spun off into its own company in 2014. It’s a freemium business model that allows users to create “boards” full of lists and cards to properly organize and manage your projects — whether those are everyday tasks you want to accomplish, or your next business proposal.

The name Trello is a derivative of the word Trellis, which gives structure to a plant as it grows. Pryor said he found it as he was searching for open domain names.

Business data analyst Kindall Deitmen uses Trello to keep up with her to-dos at work and plan for future projects. However, she also used it when she was working on her capstone project for her master’s degree.

“I worked on this project with a partner, and we made a card for each milestone,” Deitmen said. “As we finished a new version of our paper or updated our presentation slides, we would attach the newest version to the appropriate card.”

Trello recently responded to the growth of business use cases by updating itsBusiness Class product with a new UI, enhanced security, and new third-party integrations. New admin tools help enhance control and security, and the ability to sort boards into collections and highlight the most relevant boards makes the product more usable for professionals.

According to the company’s website, they now support the following integrations:

Trello Business Class starts at $8.33 per user/per month according to the website, and the product boasts such customers as Google, PayPal, and The New York Times.

One thing users may notice when they first begin using Trello is that it is very simple, and Pryor said that was intentional from the beginning. He said they noticed that teams seem inundated with information and clutter and they were trying to help users stay focused. So, the product is intentionally “constrained” in a way.

“It’s not meant to be just a project management system that you add thousands of items to, it prevents you from doing that,” Pryor said.

If you wanted to equate it to a real-world scenario, it’s akin to a cork board in a college dining hall, Pryor said. If you add a new flyer, it will have to go over something else. There’s only so much you can focus on at a time.

In terms of workplace examples, he said they see far-ranging applications such as HR using it for onboarding, salespeople using it for sales pipelines, and journalists using it to work on stories.

Despite the constraints, there aren’t many rules or guidelines for how you can use Trello. While this makes the tool powerful and flexible, Deitmen said, the freedom can be overwhelming if you don’t know where to start.

“For someone with a strong sense of project management this isn’t an issue, but if you’re new to the idea you can quickly lose a sense of organization and defeat the purpose of using it in the first place,” Deitmen said.

If you can get your team on board, though, and set a plan for how the product will be used it can help you track and prioritize your work.

In addition to its consumer and Business Class products, Trello also has an Enterprise product for organizations with more than 100 users. The company recently reached 10 million users, and Pryor said he expects they will be at 20 million by the end of next year.